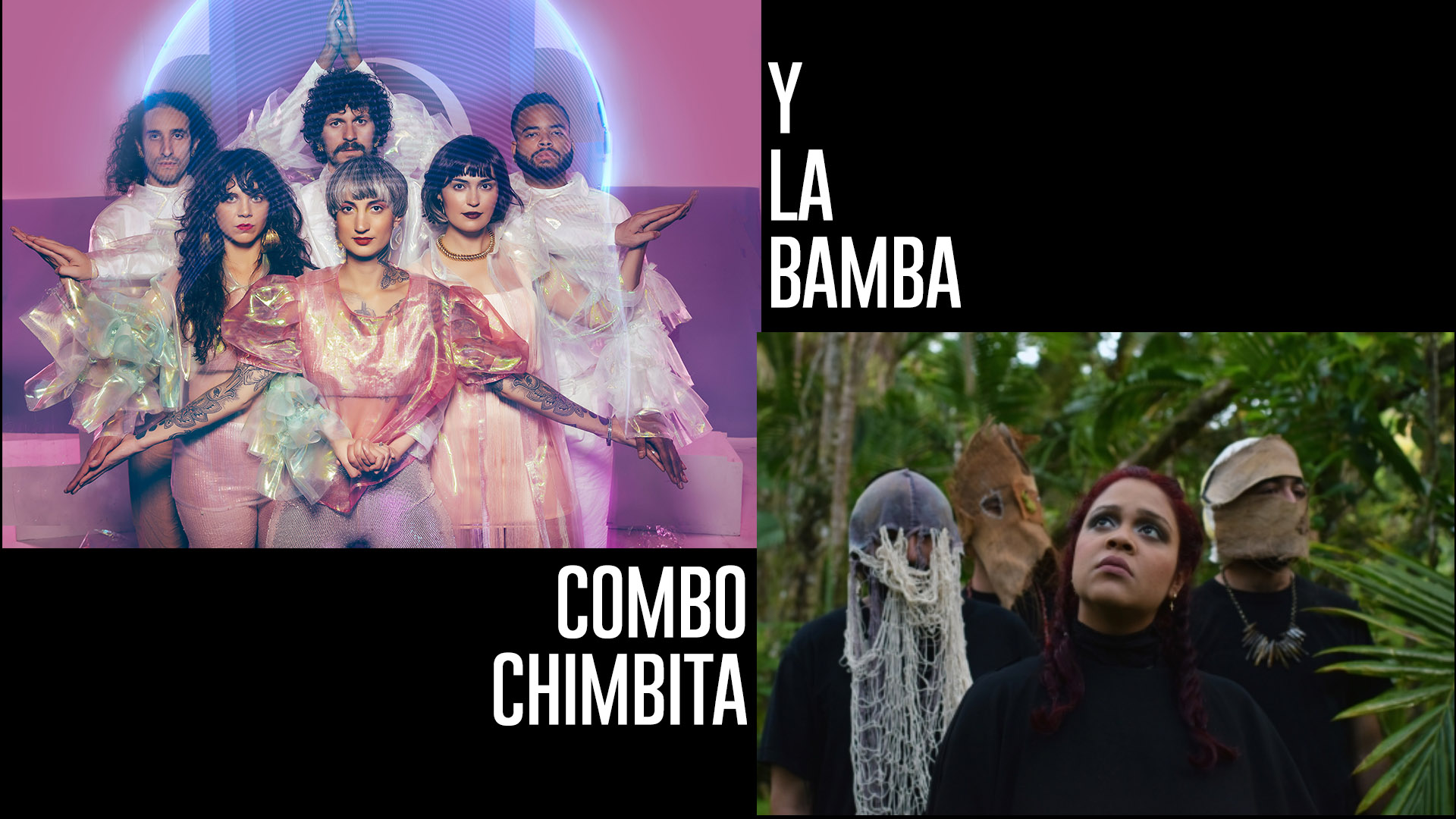 Through her folkloric mystique, otherworldly psychedelia, and a dash of enigmatic punk, Ahomale by Combo Chimbita catapults the sacred knowledge of our forebears into the future. Their second studio album and Anti- Records debut sees the visionary quartet drawing from ancestral mythologies and musical enlightenment to unearth the awareness of Ahomale, the album’s cosmic muse. Comprised of Carolina Oliveros’ mesmeric contralto, illuminating storytelling and fierce guacharaca rhythms, Prince of Queens’ hypnotic synth stabs and grooving bass lines, Niño Lento’s imaginative guitar licks, and Dilemastronauta’s powerful drumming, the lure and lore of Combo Chimbita comes into existence.

The legend begins with their first EP, 2016’s El Corredor del Jaguar, and followed up with the occult psychedelia of Abya Yala. In 2019’s Ahomale, the New York-by-way-of-Colombia troupe fuse the perennial rhythms of the Afro-Latinx diaspora with a modern-day consciousness, while tracing the prophetic traditions of our ancestry. “The more we’ve played music together, the more we began to discover things within ourselves that we were previously unaware of, almost like an energy. And that’s being communicated through our music,” explains Prince of Queens in the making of Ahomale.

Inspired by a Yoruba term, Ahomale, meaning adorer of ancestors, Oliveros reveals her quest to connect with ancestral cosmology, which the Combo pays homage to. “Ahomale resurges from the visions that we’ve been having via our music and life, and the lyrics reflect a manifestation passed on through our ancestors and the gods,” she explains. “I wanted the album to convey the search for spiritual awareness, which ultimately serves as a revelation.” In a similar spirit, Niño Lento conveys: “The protagonist of this album whose name is Ahomale possesses the ability to communicate ancestral wisdom through the music.”

With the help of producer Daniel Schlett (The War on Drugs, Modest Mouse), the group’s rootsy experimental alchemy and metal strangeness take centerfold. Oliveros howls, yowls and chirps with gut-wrenching emotion, like on the languid mirage of “El Camino,” or plaintive frenzy of the title track. Whether rock raw and soulful or bewitching like a shaman in a spiritual ceremony, her voice is always a multifaceted wonder. “Brillo Más Que El Oro (La Bala Apuntándome)” boasts alluring vintage synths that seem to time travel through the lush tropics of yore; then, the mood intensifies when its bridge brilliantly crosses into a spellbinding chant sung in unison: “Y si digo que / Que ahora ya lo se” (“And if I say that I now know”). “Testigo” is pure melodic witchcraft in action that strips away wordly façades into something bare and beautiful: “Desde principio a fin, yo siempre di mi verdad” (“from beginning to end, I always gave my truth), the singer vulnerably croons against a whirling guitar and galloping percussions.

Ultimately, Ahomale is a catharsis of divine feminine force helmed by their powerhouse vocalist, laden with the teachings from a bygone era, in tune with the spiritual realm. “Our spirit and energy have passed through multiple generations,” says Prince of Queens. “We might not be open or allowed to explore it because of Western society’s conditions. But the idea is that we are receiving messages from the past, and from our ancestors that each one of us carry.” In nearly 40 minutes of eye-opening thrills and chills, the listener experiences the pedagogy of Ahomale, journeying through her epiphanies and enlightenment. “Ahomale is a warrior, not the sword and shield type, but a woman who is ready to listen to her heart, follow her intuition and connect with her ancestors,” Oliveros avows.—Isabela Raygoza

It’s easy to talk about an artist’s growth as a series of musical decisions: an expanding sonic palette, a change in mood or tempo, an escape from the trappings of genre. It’s harder to talk about an artist’s personal—or even spiritual—growth, because that kind of progress is hard to track. Until, that is, an album like Y La Bamba’s Ojos Del Sol comes along and screams of radical transformation on every level. The Portland act’s fourth offering is a sweeping, playful and vulnerable collection that’s ripe with both musical and personal discovery. From the intimate, contemplative verses of the Spanish-language title track to the revelations delivered over the loping beats of “Ostrich,” this is an album that’s painstakingly produced while remaining emotionally raw.

Throughout the collection, Y La Bamba frontwoman Luz Elena Mendoza returns to themes of searching and metamorphosis. On one level, this is born from the Y La Bamba frontwoman’s continuing exploration of her identity as Mexican woman. Both of Mendoza’s parents grew up in Mexico—Luz was born in San Francisco, then brought up in a strict Catholic household in Southern Oregon. She spent her childhood summers playing in the orchards of California’s San Joaquin Valley with her cousins, and it was there that she soaked up the melodies and stories that were being told through traditional folk songs with three-part harmonies. These are sounds that remain a vital building block of the songs on Ojos Del Sol, an album which she says represents “a celebration of family and community.”

But on another level, Ojos Del Sol is about Luz’s search for shared humanity outside of her own community, and for a faith that is greater than just religion. These are themes that run throughout Y La Bamba’s body of work work—with roots in a 2003 journey to India, which found Mendoza falling ill and trading her Christianity for something broader—but there’s a maturity to Ojos Del Sol that speaks to true, lasting transformation. You can hear this on the lush “Kali,” where she sings—with wonderment rather than fear—that “to know yourself is to lose everything.” And you can hear it on the album’s epic closer, “Ulysses,” where Mendoza sings that her life is “written in sand and ash and stone.”

These are songs built to soundtrack coming to grips not just with one’s own mortality, but with the fragility of the world. This is heady, emotional fare, and “this record is about being a mother to these emotions,” Mendoza says.

Her clarity of voice is intimately tied to a renewed musical approach, which Luz attributes to a greater self-awareness that developed through recent collaborations with singer-songwriters Edna Vazquez and Lila Downs, as well as an exploration of mariachi, cumbia, and Latin pop with Calexico’s Sergio Mendoza—no relation—on a collaborative 2015 album released under the name Los Hijos De La Montaña.

Those collaborations helped Mendoza find her own voice as a more confident producer and songwriter on an album that is often a stripped-down affair. Mendoza plays guitar throughout Ojos Del Sol, and worked actively with composer Richie Greene to create a new sonic voice. Percussion from another regular Mendoza collaborator, Nick Delffs (Shaky Hands, Death Songs), is a welcome near-constant that adds depth and soul to the album. To that same end, Mendoza hand-cut stencil art pieces, which appear in Ojos Del Sol’s liner notes, to pair with each new song. All of this is presented as a cohesive offering, an entry in Y La Bamba’s ongoing musical conversation about community, about the self, and about survival.

“I am thankful for all of my hardships,” Mendoza says in the album’s liner notes. “They have guided me to find rest in my soul, time after time. Over and over again.”