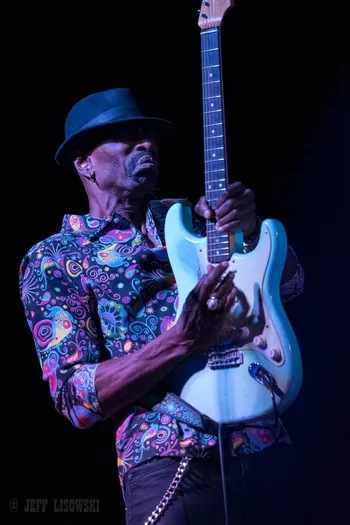 First time at The Starlet Room!

Johnny Winter, Buddy Guy, and most recently, George Thorogood and Tinsley Ellis... after opening for these greats, and touring the US, Canada, and Europe for years, Los Angeles-based Dennis Jones and his band are now ready to HEADLINE! Sizzling hot guitar solos. Smooth and soulful vocals. High-energy stage performance. Backed by a rhythm section that is second to none, this IS Dennis Jones. Check out a live show, and you’ll instantly agree, this band ROCKS the blues like NO other!

Dennis’s feet are firmly rooted in the past, yet his heart and soul are connected to the present. He writes songs that seamlessly blend the best of both worlds, presenting a unique and contemporary style of American rock and blues. And he isn’t afraid to tackle the controversial issues of today. Dennis has written songs for other notable artists as well-- Guitar Shorty and others!

He also spent three years playing guitar with The Bus Boys and with The Zac Harmon Band, when they won first place in the 2004 Blues Music Awards Competition in Memphis TN.

Dennis has released 7 successful CDs, and 1 DVD, on Blue Rock Records. Each and every one of these has met with rave reviews. The latest CD Soft Hard & Loud was released in late 2020.

Babe’s & Ricky’s Inn is an award-nominated film documentary about a legendary Los Angeles blues club. Dennis Jones is one of the many talented musicians featured in the 2013 film alongside Keb’ Mo, Deacon Jones, and Barbara Morrison. Additionally, Jon Lindstrom’s 2013 film, How We Got Away With It, features a Dennis Jones original tune, "Passion for the Blues." The film entitled, Sea of Fear (2006) , featured "Deep Blues", from his debut album. https://dennisjonescentral.com/