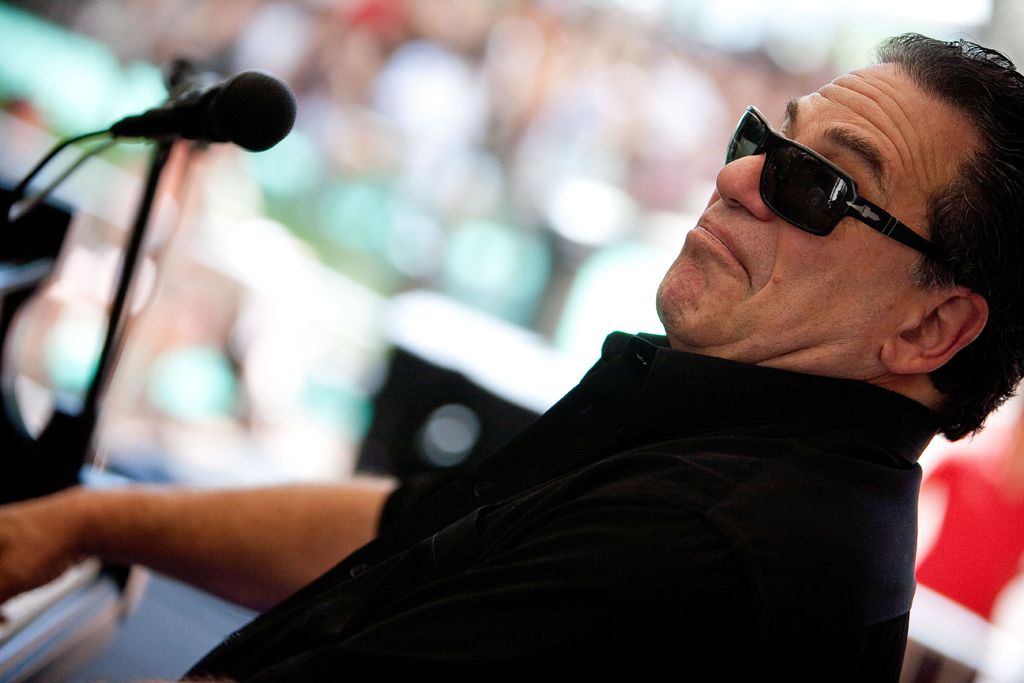 "While most current artists who do New Orleans music focus on either Meters-style funk or modern brass-band sounds, Woods is one of the very few who take it back to the 1950s. Through the power of his vocal and keyboard delivery and his employment of world-class musicians from the city itself, he succeeds brilliantly in keeping the tradition burning brightly." -Lee Hildebrand, Living Blues Magazine

"Mitch Woods has so strong an intuitive feel for blues and boogie piano that he can record with a pack of special guests without losing his way or being overshadowed." -Frank-John Hadley, Downbeat

Mitch Woods and His Rocket 88s have been the torchbearers of a great American blues musical heritage, not for three years but three decades. Taking their inspiration from the great jump n’ boogie outfits of the late 40s and early 50s, they breathe fresh life into the music that gave birth to rock n’roll. Woods styled his group after the jumpin’ n’ jivin’, shoutin’ n’ honkin’, pumpin’ n’ poundin’ bands of Louis Jordan, Wynonie Harris, Joe and Jimmy Liggins, Amos Milburn, and Roy Milton. Adding a healthy dose of New Orleans rhythm and blues, piledrivin’ piano, and some of his own contemporary playful lyrics, Woods and His Rocket 88s forge their own brand of music they call “rock-a-boogie.”

"Dubbing his swinging approach "rock-a-boogie," pianist Mitch Woods & His Rocket 88's have revived the jump blues approach of the '40s and '50s. Originally from Brooklyn, New York, Mitch Woods moved to San Francisco in 1970. While he was growing up in Brooklyn, he studied both jazz and classical music, but when he relocated to the Bay Area, he primarily played jump blues and R&B. San Francisco guitarist Hi Tide Harris introduced Woods to the joyous jive of Louis Jordan, and the pianist's musical tastes were transformed. Between 1970 and 1980, Woods performed as a solo artist, gigging at a number of local clubs. In 1980, he formed the Rocket 88's, featuring Harris on guitar, and four years later, the band released its debut album, Steady Date, on Blind Pig. The album led to concerts at national blues clubs and festivals, as well as several European dates in 1987. In 1988, Woods & His Rocket 88's released their second album, Mr. Boogie's Back in Town, and embarked on another round of shows in the U.S., Canada, and Europe. Three years later, their third album, Solid Gold Cadillac, appeared. Woods & His Rocket 88's continued to tour and perform in the '90s, releasing their fourth album, Shakin' the Shack, in 1993. Jump for Joy was issued in early 2001.

After a five-year recording layoff, Woods returned with the 2006 album Big Easy Boogie, which was recorded with a crew of musicians from New Orleans schooled in the city's trademark style. Arriving in 2008, Jukebox Drive was recorded during a tour of Europe, with the pianist backed by the Spanish swing band the Lazy Jumpers. Released in 2010, Gumbo Blues was another album in the New Orleans style, with Woods performing a set of tunes written by blues legend Smiley Lewis. A concert tour of Turkey by Woods and his band was preserved on the 2012 live album Blues Beyond Borders: Live in Istanbul.

“I was deeply impressed with the warmth and hospitality of the people and their openness and enthusiasm for the American musical form we call “the Blues”. It made me realize that we are musical ambassadors-able to cross cultural, religious, and national borders that most people cannot. In this CD and DVD I document our tour of the Republic of Turkey, a secular nation with 99% Muslim population that straddles the border of east and west, geographically and culturally. On this journey I realized in my heart and soul that music truly crosses all boundaries and Blues is certainly beyond borders.”

Issued in 2015, Jammin' on the High Cs was another live disc, this time recorded while Woods was performing as part of the seagoing blues festival the Legendary Rhythm & Blues Cruise. Friends Along the Way, released in 2017, collected recordings of Woods performing with a variety of noted blues artists, including Van Morrison, Taj Mahal, John Lee Hooker, Charlie Musselwhite, Elvin Bishop, and James Cotton. His newest release is 2019's A Tip of the Hat to Fats is his rollickin' tribute to one of his heroes, Fat Domino, and was recorded live at the 2018 Jazz & Heritage Festival in New Orleans.