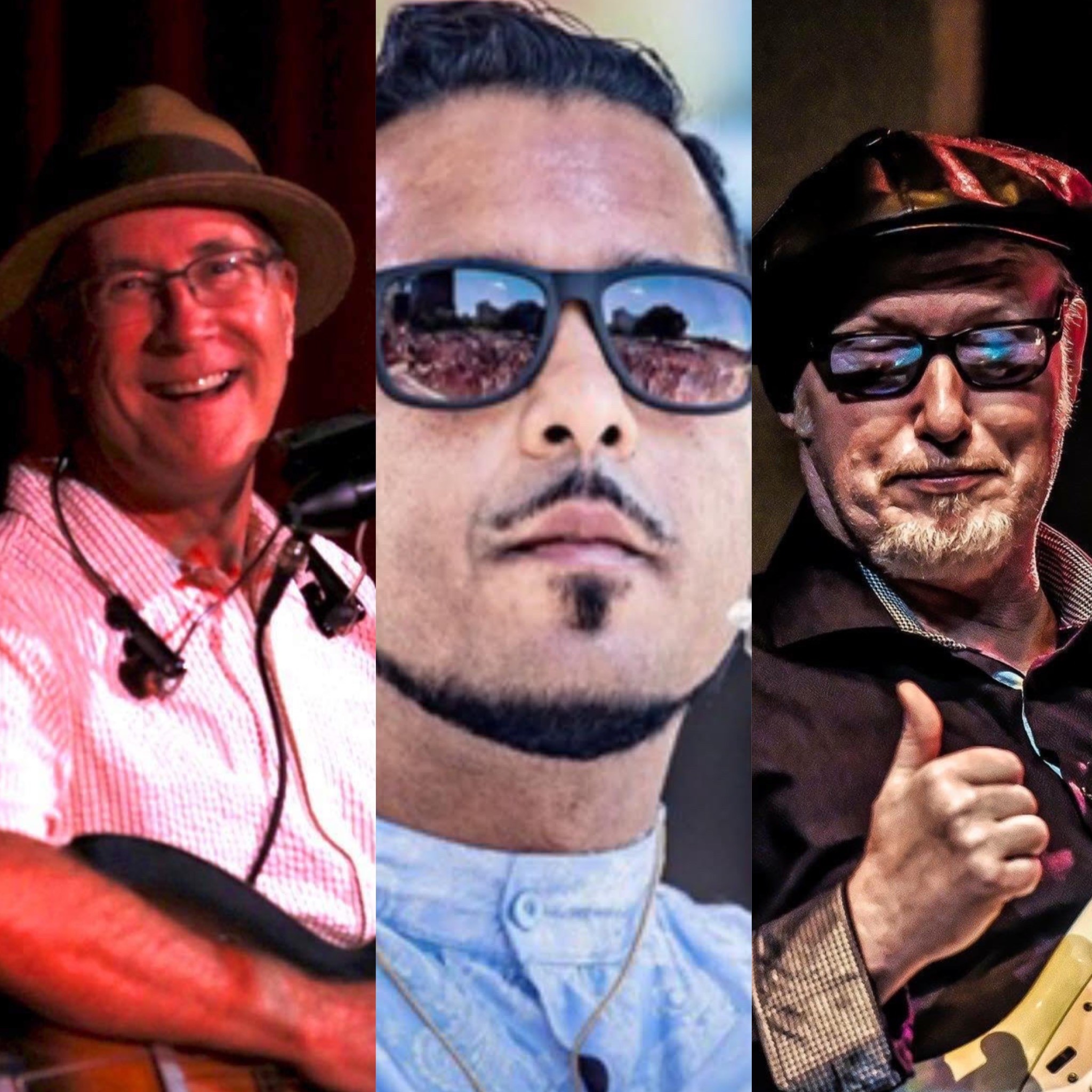 Bay Area-based internationla blues all stars! Mark Hummel( Guitar & Harp), Aki Kumar (Drums & Harp), Rusty Zinn( Guitar & Drums)! These three pay tribute to a seminal musician/songwriter and singer who massively influenced modern blues AND rock and roll. Jimmy Reed's particular style of electric blues was popular with blues as well as non-blues audiences. Reed's songs such as "Honest I Do" (1957), "Baby What You Want Me to Do" (1960), "Big Boss Man" (1961), and "Bright Lights, Big City" (1961) appeared on both Billboard magazine's rhythm and blues and Hot 100 singles charts.

"Mark Hummel came of age in the early '70's at the height of rock and roll, like many of his peers went and bought a harmonica and hasn't stopped playing since. A specialist in West Coast Blues, he is a seasoned showman who knows more than a thing or two about how to please an audience." --The New Yorker

AKI KUMAR Indian-born, San Jose based aka "The Only Bombay Blues Man," left his home in Mumbai with the intention of working as a software engineer in Silicon Valley. Then he discovered the blues, and his life dramatically changed. Singing and playing harmonica, he steeped himself in the music and became a fixture in the blues clubs throughout Northern California, where he developed a unique, audacious blend of Chicago-style blues which then led to playing retro Bollywood pop mixed with the blues. Aki recorded for Little Village Foundation and received major press and been featured in Variety, NPR plus played major festivals such as Hardly Strictly Bluegrass, San Diego Blues Festival and the Waterfront Blues Festival. Aki performs worldwide now, and is signed to SONY.

RUSTY ZINN-was raised in Northern California, and was introduced to music via both his mother's and brother's record collections. He bought blues recordings himself, intrigued by guitar players such as Robert Lockwood, Jr., Eddie Taylor, and Jimmy Rogers. Having practised the drums as a youngster, Zinn purchased his first guitar at the age of seventeen, and then witnessed Luther Tucker perform in concert with Rogers. Within twelve months, Tucker invited Zinn onstage and gave him some guitar playing advice. By the late 1980s, Zinn was playing in several Bay Area bands, and had backed both Rogers and Snooky Pryor.

The Rolling Stones have cited Reed as a major influence on their sound, and their early set lists included Reed's songs "Ain't That Lovin' You Baby", "The Sun Is Shining" (played by the Stones at the 1969 Altamont concert), "Bright Lights, Big City", and "Shame, Shame, Shame". "Little by Little", the B-side of their February 1964 UK hit single "Not Fade Away".For their 2016 release, Blue & Lonesome, they recorded a version of Reed's "Little Rain".

The Yardbirds recorded "I Ain't Got You" with guitarist Eric Clapton. With Jeff Beck, they recorded the Reed-inspired instrumental "Like Jimmy Reed Again", which was released on a reissue of their album Having a Rave Up. The Animals considered Reed one of their main sources of inspiration and recorded versions of "I Ain't Got You" and "Bright Lights, Big City". Van Morrison's group Them covered "Bright Lights, Big City" and "Baby, What You Want Me to Do", both of which are on the album The Story of Them Featuring Van Morrison. "Big Boss Man", sung by Ron "Pigpen" McKernan, was regularly performed by the Grateful Dead in the 1960s and early 1970s and appears on their live album Grateful Dead.

Elvis Presley recorded several of Reed's songs, having a hit with "Big Boss Man" in 1967 and recording several performances of "Baby, What You Want Me to Do" for his 1968 TV program.

Bob Dylan paid tribute to Reed with the song "Goodbye Jimmy Reed" on his 2020 album Rough and Rowdy Ways.