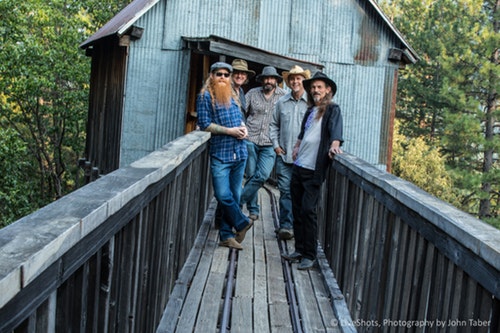 Achilles Wheel is a California band that blurs the lines between genres with a mix of infectious high energy dance beats and stark lyrical ballads. Roots Rock storytelling combined with dance hall psychedelia.

Much like life itself, their music breathes in and out with joy and pain, hurtling forward like a wheel, intent on hope and love. They play hard as a way to break down walls and celebrate life. The harsh light of the modern world does not diminish their idealism as we struggle to live free and have a good time&hellip; and in the end - hopefully make a difference. Achilles Wheel fearlessly sings out to these times, the here and now.

The Wheel began 2018 with the release of their 4th studio album “Sanctuary”. From sweaty dance halls to intimate acoustic shows, the band never tires of relating to their audience and will keep playing until the conversation is complete.

“These Sierra Mountain improvisational-spirited rockers never paid much mind as to how other “jam-bands” do it, nor do they let their influences determine their sound.” - The Grateful Web The Friends of Achilles Wheel Highway Cleanup is a monthly volunteer event dedicated to picking up trash along the road in the band’s hometown of Nevada City. Battle against
the rogue litter that inexplicably escapes from people’s cars and you’ll earn a ticket to the next show! 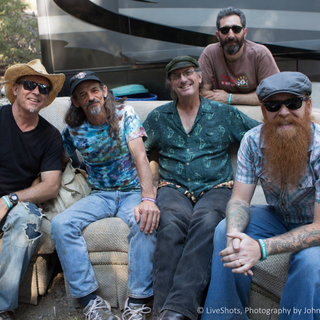 Achilles Wheel is a California based rock and roll band that blurs the lines between genres and fuses an infectious blend of Roots and World Music, Rockadelia.

Their sound comes across as both Old School and New School and is riddled with great songwriting. The one thing that rises to the surface as you get to know this band is that supporting the benefit of our human condition is foremost in their work. They play hard as a way to break down walls and celebrate life. The idealism that they embraced as younger men has not diminished in the harsh light of the modern world as we struggle to live freely and have a good time, and in the end, hopefully matter. Achilles Wheel fearlessly sings out to these times.

With the release of their third studio recording, ‘Devil In The Yard’ Achilles Wheel is also waving the flag for Ben Jacobs (Poor Man’s Whiskey, Grateful Bluegrass Boys, Rusty Stringfield), who came to the AW studio in Nevada City to record a couple of songs, but after playing on every track he left as the new Achilles Wheel keys man. He joins Jonny Mojo Flores on lead guitar and vocals, Paul Kamm on guitar and vocals, Shelby Snow on bass and vocals, Mark McCartney on drums and vocals and Gary Campus on drums and percussion.

‘Devil In The Yard’, the follow up to their critically acclaimed 2014 release ‘Stones To Sand’, received this review from Deborah Grabien in No Depression…

“Achilles Wheel has once again shown that they're as good in the studio as they are live.

I gave up trying to single out particular songs as standouts on my second listen, because the 13-song list plays more like a beautifully crafted set. There are no weak tunes on Devil In The Yard, and no filler. The CD is a corker, edge to edge, covering the spectrum of exuberance to regret.”

The band recorded ‘Devil In The Yard’ at home, with woodstoves crackling, dogs barking and all manner of ‘ghost sounds’ appearing on the naked tracks. But it was the addition of the amazing Grammy Award winning producer and engineer Oz Fritz (Tom Waits, Bernie Worrell, Primus) who brought the project into focus with his mixing and mastering talents.

“The stylistic capacity of Achilles Wheel is ever surprising, constantly evocative of something warmly familiar, but never entirely definite. It’s that blend of well structured solos, integrated musicianship, beautiful vocal melodies and strengthened songwriting that has been Achilles Wheel from the beginning but now finds them in peak form.

As expansive of an achievement as Devil In The Yard is, their improvisational expertise and interlocked dexterity makes their live show a spectacular event on its own level. This album is bound to make some new lifelong followers of the Nevada City rockers.”

The Western states are very familiar with these live shows and the rising tide of Achilles Wheel, having been a part of both the fireworks and the intimacy at festivals like the Strawberry Music Festival, Kate Wolf Memorial Music Festival, California World Music Festival, Railroad Earth’s Hangtown Halloween, as well as at venues such as The Great American Music Hall, Terrapin Crossroads, The Sweetwater Music Hall and the Sierra Nevada Big Room.

We’ve been following the Country-Folk-Rock-Formation ACHILLES WHEEL from Nevada City, California, right from the beginning of their still rising career. Album No. 3, titled “Devil In The Yard,” is yet fresher, more laid back, catchy and diversified – literally masterfully. Splendid, compelling and easy-going, just following their own intuition for the right songs.”

The Wheel keeps turning as the year progresses, and DJs across this country and in Europe are repeatedly sliding AW CDs into their players and bringing the music to new ears. Tune in at www.achilleswheel.com.

Check out these reviews in their entirety…